Being productive before creative in process of growth hacking 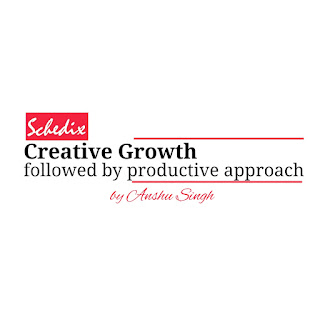 When we talk about growth hacking, we symbolically assess growth in terms of monetary value and overall expansion.

But what growth actually means? 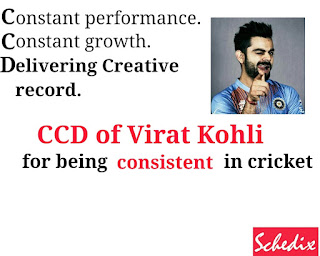 A consecutive series of continuous success?
A constant wining in situations where we might have almost lost? Just like Virat Kholi.
Being able to deliver what needed at specific time?
All of these might look like philosophies and believe me 8 billion people will give you 8 times meaning of Growth in in 8 different ways but the only matters which will show the result, practically. Isn't it?
Boy! failing to score even 20 out 100 in maths strated scoring 80 out of 100 in maths. Is it growth or something else? Does it came in just one night or there are numerous of ways involved in making himself 4 times better than previous? Obviously, it may have took time.
Footballer trying to kick the football from mid to goal have not learnt the skill overnight, Bill Gates and Jeff Bezos strategic development skills might not been sharpened in one trail. Mr. Narendra Modi have not became mass orator from the time he first spoke publicly. They all have took there time, so does growth hacking will take. Everything just don't happen overnight, there is continuous process involved in it and it will gives results when we make the process productive for ourselves. The idea is to learn the basics first just like we learnt alphabets first before reading.  In baseball, you can't hit home-run if you're holding the bat for the first time--until and unless ball hit the bat speculatively. There are certain inputs which are being coded to get the output, everything can't happens on just one click, your one-click is effort of some people who made that one-click to be clicked once. Just like you clicked the thumbnail or link to read this article--it maybe 1000 characters which combined up to make the thumbnail or link to work. It happened from the back-end, which we can't see, so does the growth hacking.
Be productive before creative in growth hacking means you're not mature at pre-mature stages, the mango will take time to ripen and taste sweet. Ironically, we never drove the car right from first time? Isn't it! We learned the skill first and excelled later, so does growth hacking will also take. Talking about the productivity in context to growth hacking means growth hacker will need to identify its flaws and fallacies in order to growth hack in creative way. I remember, I read somewhere that "when life gives you chicken make it a soup" which can exactly describe my content to this context.

Why productive before creative? 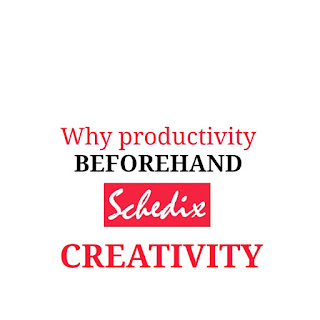 There are certain ways by which growth hackers can really find out whether they are growing from the self-end or only from organizations-end. It will sound just like Salesman became Sales Manager only by learning sales first. If you're discipline in your discipline your discipline will make you more disciplined and as result it will reflect in your work. Just like Rahul Dravid's discipline on and off the field made him "the wall" in history of cricket because of the fact he was disciplined in his discipline. So, in growth hacking the disciplined will surely make you productive which will later put the ladder of creativity for you to climb.

Do productivity will increase my creativity? 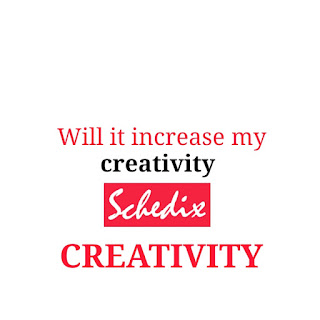 When you will meet people in corporate world, they all want's something very new, something very creative and at the same time it should be productive enough to generate handsome revenue. Sounds the simplest rule but surest and guaranteed rule to be successful. Here, in context to growth hacking we should learn and develop our own metrics in form of self-evaluation because how well we are able to evaluate our-self's will tell us how well we can work, if discontinued repeating the same mistakes and once we build up our own foundation our mind will surely finds new ways to do same thing in different way because we are automatically being trained enough in our basics before developing the advance mode. If you remain productive than your brain will inherit the characteristics which will help in development for the creative things.

Will this process will be effective in growth hacking? 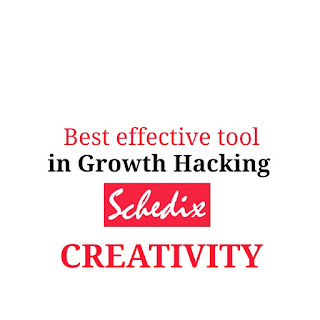 There is simple answer to this question. Can you develop software without knowing ABC of  programming? Absolutely, not! Can you hack software without knowing software development? Utterly, no one can on their first time. Growth hacking, itself very vast process followed by systematic intervals, just one need to excel the basics to turn on for intermediate or advance mode. It would be simple for you to draw tree if you know how to draw lines. Productivity here means being constant to produce result which will automatically enhance creative skills.
It is always advisable to choose the steps before evaluating in growth hacking because organic growth cascades much faster than inorganic and limited growth, especially, in growth hacking industry.
#growthhacking #productivity #creativity
21.56k views

Popular posts from this blog

April 06, 2020
To be honest, working in an environment where dozens of loads on heads aren’t an easy task to manage, we simply forget the key principles of success, we often makes decisions in hurry and often rely on few facts rather accurate facts. When I’m writing this the world is in great crisis; hundreds of countries are in lockdown, millions of people in the world are fighting with COVID-19 pandemic. In such situation when whole world is under distress, so does the businesses are. Businesses tends to lose millions alone and trillions of dollars if consolidated the figures under single table. Today, the “think-hats” are not thinking of how to generate revenues but are more focusing on how to survive. In this crucial times when millions of business are at the verge being extinct, I personally see the huge consumer behaviour shift post-pandemic. My personal logic behind the situation is when whole under single umbrella fighting the same thing, the consumer shift in choices will be quite relative.…
Post a Comment
Read more

August 23, 2019
There are hundreds of ways you can reach to people and out of which there are thousands of way you can convert your sales. Just imagine hypothetically, if you completed your reach to each and every audience in your targeted segment and end-up up with heavy cash, do you think they will remain loyal forever? Do think selling them once in lifetime in more than enough?

No, is the obvious answer for this question and there is no one who can deny the fact that once the business will always not remain the business if not changed as per demand and supply matrix.

Here, I m going to share you some excellent strategies which you can use online to make your customer buy your product/services again and again.

1. Focus on loop-purchaseSuppose you have business and it is doing pretty well online whether its conversion from view to sales our call-out actions everything is doing pretty well. But there is adage, it's not necessary that what looks good is always good from inside. We sell millions of pr…
Post a Comment
Read more

November 01, 2018
The arguments never ends, simply because it is like double face coins having heads as benefits and tales as losses, in fact, its better than the worse for non-performing products or services to cope up with cross-selling demands. There are endless arguments, endless debates on the this topic-Does cross-selling really helps?

Well, if you believe or not but many times it works better than what other channel sales strategies wont work. Here is how you can plan the things out for sales growth.

1. Creating polygamous benefitsPolygamous! is the word I would prefer to use here, have you heard the proverb "when one door closes others opens"? It is what advisable here, Never! dare to end-up having single benefits for product or service always have many to increase penny because you must know the fact keep the doors open until you succeed in context to this statement have more than one benefits for cross-selling.